Male Fertility Challenges… What Are The Causes? 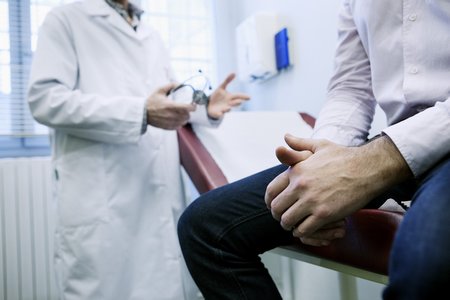 During an insightful interview on 702, Dr Paul le Roux – a reproductive medicine specialist and director of Cape Fertility in Cape Town – explained some of the fertility challenges that modern men are facing and provided an overview of some of the causes, as well as the highly effective treatments available. In this article, we provide a synopsis of Dr le Roux’s insights, look at some of the causes mentioned and expand on the treatments available.

Studies increasingly indicate that male fertility rates are declining and have been doing so for some time.

Globally, an estimated one in six couples struggle with infertility, which is defined as having unprotected intercourse for 6 months or longer without achieving a pregnancy, where the female partner is older than 35.

Historically, women carried the blame for a couple’s infertility, because it is women who carry the baby and deliver the children, and so the focus was always on the woman when a couple could not fall pregnant.

Today we know that the female partner is not automatically responsible for infertility in a couple.

What forms do male infertility take?

Male infertility can take various forms, for example, a complete absence of sperm, a low sperm count or problems with the shape or movement of the sperm.

When a sperm analysis is done, there are various factors that are investigated.

The first is the volume of the sperm. A normal volume is at least 1.5ml and if there is less, it may point to an obstruction somewhere between sperm production and ejaculation.

The number of sperm in the semen sample or the concentration of the sperm is also measured. What is usually regarded as normal is around 15 million sperm in 1ml of a semen sample. Below 10 million will raise concerns about low sperm count and may affect natural conception.

Another functional aspect of the sperm that is measured is the motility or the movement of the sperm. Generally, about 40% or more of the sperm should be normally moving.

What is causing increasing male infertility?

According to studies, research papers and semen analysis results among fertility clinics, there is a decline in male fertility levels worldwide. A closer look at the known and suspected causes of male infertility sheds some light on this trend.

While the exact causes are not known, but there are many possible factors in the environment that could be damaging the testicles, or affecting sperm function.

Sperm problems may be due to genetic disorders or a problem with hormone function, or even due to specific childhood diseases, for example, mumps – a viral illness that affects the testicles as well.
Other important possible causes include infections from sexually transmitted diseases (STDs) like chlamydia and gonorrhoea. This is because these infections block the little tube between the testicle and the penis where the sperm travels through, called the vas deferens. So, there may be sperm in the testicles, but it can’t be ejected anymore.

While anything done in moderation should not have an extremely negative impact on your health, the excessive use of alcohol – as well as smoking – undoubtedly decreases fertility in both partners. So, a drink once a day should be okay in terms of male fertility, but drinking four units a day will certainly decrease sperm function. Other lifestyle factors, such as being overweight, drinking excessive amounts of coffee or poor nutrition, will also negatively affect fertility in both partners. Certainly, lifestyle diseases such as diabetes can also significantly affect sperm function.

Another certainty in terms of sperm problems is the use of the steroid testosterone. It is often used by gym enthusiasts building big muscles. The reality is that taking testosterone will automatically switch off this hormone production in the brain, which is responsible for producing sperm. So many men who are using anabolic steroids struggle with fertility.

Thankfully, the good news is that this can be reversed. It takes around three to four months after quitting the use of anabolic steroids for the process of producing new sperm to be re-established.

Fortunately, there are as many treatments for male infertility as there are possible causes. At Cape Fertility, we can help even patients with severe male factor infertility.

Some treatments are quite simple, for example, insemination involves preparing the male partner’s sperm before inserting artificially it into the female partner’s uterus when she’s ovulating. This treatment is suitable when there is a mild sperm problem.

For more serious challenges, in vitro fertilisation or IVF treatment may be used. During this treatment, the female partner’s eggs are extracted and mixed in the lab with the male partner’s prepared sperm to be fertilised. One or two of resulting embryos (fertilised eggs) are then placed back in the female partner’s uterus, where one will hopefully implant and become a baby.

A very advanced treatment called ICSI (Intracytoplasmic Sperm Injection), involves injecting one single sperm cell into each egg cell. This treatment has revolutionised male infertility treatment because even the most severe sperm problems can now be treated. For example, even in cases where there’s no sperm being ejaculated at all, sperm cells can be extracted from a tiny piece of tissue from a testicle to be injected into the eggs.

Even if all these options are unsuitable or exhausted, there is still the option of using donor sperm along with assisted reproductive therapies (ART) such as IVF or insemination.

If you are concerned about your fertility, we would like to invite you to set up an initial consultation with one of our fertility experts at Cape Fertility. It is as simple as contacting us here…

At Cape Fertility, we value each individual patient and we look forward to providing you with individualised and personalised care, affordable quality fertility treatment, and higher success rates at our purpose-built premises in the beautiful city of Cape Town.