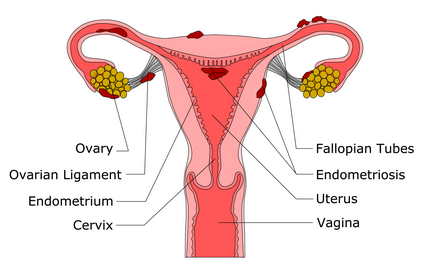 During an insightful talk at the recent Fertility Show Africa, Dr Sulaiman Heylen – a reproductive medicine specialist and director of Cape Fertility in Cape Town – highlighted endometriosis as one of the most common causes of female infertility.

There are four common causes that are responsible for the majority of female infertility cases, explained Dr Heylen: endometriosis, fibroids, tubal disease and polycystic ovarian syndrome (PCOS). In this article, we share Dr Heylen’s insights into endometriosis and find out what it is, what causes it, what symptoms it produces and when to reach out to a specialist.

Medically, endometriosis is defined as: “a benign condition in which endometrial glands and stroma are present outside the uterine cavity and walls.”

One could say endometriosis is uterine lining growing in the wrong place: often at the back of uterus or around the ovaries or on other organs.

There are also different stages of the disease and the ASRM (American Society for Reproductive Medicine) classification is used to determine the stage of endometriosis in a patient.

The severity and course of endometriosis is highly unpredictable. According to ASRM, some women may have a few endometriosis implants on the surface of the pelvis, the peritoneum, or pelvic organs, or these may invade the peritoneum and grow as nodules. Endometriosis may grow on the surface of the ovary as implants or invade the ovary and develop a blood-filled cyst called an endometrioma, or a “chocolate cyst” (so called because over time the blood they contain darken to a deep reddish-brown colour). These cysts may be as small as a pea or grow larger than a grapefruit.

Endometriosis may irritate surrounding tissue and produce internal scar tissue called adhesions. These adhesions can bind the pelvic organs together, cover them entirely, or involve nearby intestines. The adhesions may keep fallopian tubes from picking up the egg from the ovary during ovulation. Endometriosis also may grow into the walls of the intestine or into tissue between the vagina and the rectum.

It’s important to understand, however, that there’s no correlation between the classification and symptoms. That means that a woman can have severe endometriosis but experience no symptoms, or a woman with minimal endometriosis can experience severe symptoms.

However, while the stage of endometriosis does not correlate with the presence of or severity of symptoms; with stage IV endometriosis, infertility is very likely.

It can start at any age – affecting teenagers, women in their 20s or 30s, and even sometimes women in their 40s. Women who are diagnosed at a young age, very often have more severe endometriosis.

It is also important to realise that it affects women in their most active reproductive or fertile years.

Experts do not know why some women develop endometriosis.

During each menstrual period, most of the uterine lining and blood is shed through the cervix and into the vagina. However, some of this tissue enters the pelvis through the fallopian tubes. Women who develop endometriosis simply may be unable to clear the pelvis of these cells.

Some theories include environmental factors or immune deficiencies, as it is the immune system that is responsible for clearing the endometriosis tissue.

What Are The Symptoms?

The most common symptoms of endometriosis are pain in the pelvic area, including painful periods. In the majority of the cases, chronic pelvic pain is due to endometriosis. The pain can be so severe that it impacts the quality of a woman’s life. When a patient reports pain rated at worse than mild or moderate on a pain scale, the possibility of endometriosis should be considered.

Endometriosis pain also commonly presents as very painful periods. However, pain in between periods is also a common symptom of endometriosis, so chronic pelvic pain would also indicate possible endometriosis.

The pain can also be experienced at other times, such as during sexual intercourse, or when passing urine or stool, especially when during a period.

Endometriosis is an inflammatory disease, and the inflammation it causes can interfere with a woman’s ovulation.

Endometriosis can also cause anatomical abnormalities such as scarring that can reduce the chances of conceiving. For example, endometriosis adhesions may prevent the fallopian tubes from picking up the egg from the ovary during ovulation.

It is, however, important to understand that not everybody with endometriosis have the same symptoms. Some women have no symptoms, others only experience minimal or mild symptoms, even among those with severe endometriosis. But for many women, the impact of severe symptoms on their lives are significant, affecting their quality of life.

Why Endometriosis Is Often Misdiagnosed

One of the problems with endometriosis is the long delay before it is accurately diagnosed. In some cases – from the start of the symptoms until the first consultation with a specialist when the disease is properly diagnosed – there can be a delay of seven years!

A diagnosis of endometriosis can be confirmed in different ways.

The first is a doctor’s suspicion that endometriosis could be the cause of the symptoms, based on the patient’s history. For example, if a patient’s symptoms include severely painful periods, pelvic pain, as well as infertility, endometriosis will be among the obvious possible causes. If a patient with endometriosis experiences no symptoms, an accurate diagnosis may take much longer.

A diagnosis of endometriosis can also be done through clinical examination using advanced ultrasound technology. As this technology improves over time, medical specialists are better able to detect endometriosis.

Laparoscopy is a minimally invasive surgery during which a small incision in the navel allows medical specialists to look inside the abdomen and the pelvis, to inspect the uterus, the ovaries and the fallopian tubes, and to detect and treat any endometriosis at the same time.

What Should I Do If I Think I Have Endometriosis?

Given that one in 10 women will be affected by endometriosis in the prime years of their lives, experiencing severe pain in the pelvic area, very painful periods or infertility may be an indication of endometriosis.

If you suspect that you have endometriosis, especially if you are trying to conceive, we would like to invite you to come and meet one of our specialists by clicking here…

We offer all the most effective fertility treatments at Cape Fertility, including treatment for endometriosis.

At Cape Fertility, we value each individual patient and we look forward to providing you with individualised and personalised care, affordable quality fertility treatment, and higher success rates at our purpose-built premises, situated in the Claremont Medical Village in the beautiful city of Cape Town.